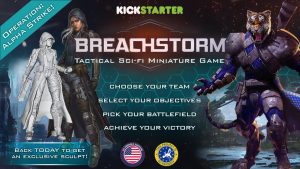 If you haven’t heard, Breachstorm is a brand-new, fast-paced and competitive tactical miniatures game for 2 players.  In the game, players take command of small teams of miniatures in a desperate bid to complete asymmetric, narrative objectives.

As of Tuesday, September 18th Breachstorm is currently available on Kickstarter, and you can even get a cool, limited edition reward for backing early! 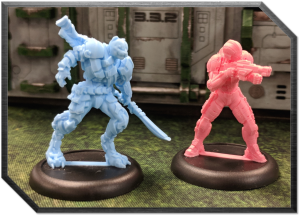 The game uses highly-detailed, 30mm resin models that available both in core-set packs that contain all the necessary components to play the game, and in separate expansion and reinforcement packs.

Players choose one of four unique factions to fight for; each with wildly different units, abilities and special mechanics, then select their mission objectives from a wide array of options and assemble their crack team from the best troops for the job, each individualized with powerful upgrade cards.

Teams deployed by the Homeworld Confederacy rely on teamwork and the ranged superiority afforded by their cutting-edge military technology to achieve victory. Acting as a cohesive unit, Homeworld fire teams use overlapping buffs to synergize together and devastate even the toughest opponents.

Hailing from a feudal collection of autocratic nation-states grounded in ideals of personal and collective honor, teams from the felinoid Zhren’thrar Prides are fearsome close-range combatants. Using powerful plasma weaponry and the Fury token mechanic, Zhren’thrar troops become more powerful if their comrades are cut down in pursuit of an honorable death.

Two more factions – the voracious Volucrid Host and shadowy Ativari Conclave will be available during the campaign as stretch goals!

As part of creating their team, players choose the objectives that their teams are attempting to complete.  These missions feature a wide spectrum of possible missions, from retrieving vital intelligence and hacking enemy computer systems to holding ground and bodyguarding essential personnel.  Each player contributes one objective to the game’s scenario, and the combination of the two creates the overarching narrative.

Players then take turns placing terrain features from the terrain templates included with the game. This allows each team to sculpt the battlefield to benefit their strategy and ensures that no two games will play the same.

During a game of Breachstorm, players take turns acting with Field Officers – battlefield commanders who enhance their troops with powerful Orders – who can, in turn, order small groups of Infantry to act alongside them. This creates a constantly-changing game state that doesn’t leave any player out of the action for long.

The first team to fulfill their mission will win the game; so players need to balance scoring their own objectives with contesting enemy efforts to score in a brutal race to complete their agenda.

Breachstorm’s low model count and precise rules make it easy to pick up and very fast to play, with a low barrier-to-entry for new players and those who may be new to the miniature gaming hobby.  Games typically conclude within 60-80 minutes, and the terrain-template system makes Breachstorm 2d-terrain-friendly for gamers looking for an easily portable sci-fi skirmish system. 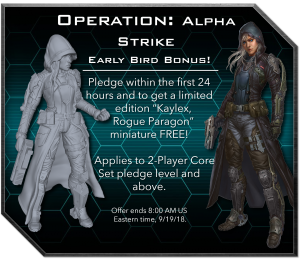 Get in on the ground level in Breachstorm’s first Kickstarter, launching Tuesday, September 18th!  Back within the first 24 hrs to receive a limited edition “Kaylex, Rogue Paragon” variant miniature!

More than Dice: Episode 226 Dioramas and you!

We sit down with Jim and talk about dioramas and how to make a cool diorama and still use use your mini!

The team sit down and discuss the MK4 beta!
: Play in new window | Download

Hosts: Jesse, Keith, StevenThe first and most prolific podcast in the history of MK4 is back with some more hot news! Join us as we dive into the...

On this final episode of the Deep Dive into Privateer Press Series, Paul and Erica interview convention manager John Swinkels. John talks about the...

Hosts: Keith, Jesse, Nigel, Steven We got Keith on the cast to ramble with us about the MK4 announcement! Tune in tomorrow for a more organized chat...