Hey everybody!  I’m Trevy and I’m excited to introduce you guys to Breachstorm; the new sci-fi miniature game I’ve been lucky to be developing in for the better part of the last year. 😀

Breachstorm is a 35mm skirmish game that pits small teams of 6-8 miniatures against each other on a 3’x3′ board as they compete to accomplish specialized objectives.  Your team will be composed of elite commandos that can be personalized with their own set of abilities using special trait upgrade cards.

The game is designed to play quickly while remaining as deep as other miniature games; a full game of Breachstorm can be played out in under an hour!  The games’ low model count means that it’s easy to collect and play out of the box; a faction starter box will contain a whole tournament-legal team! 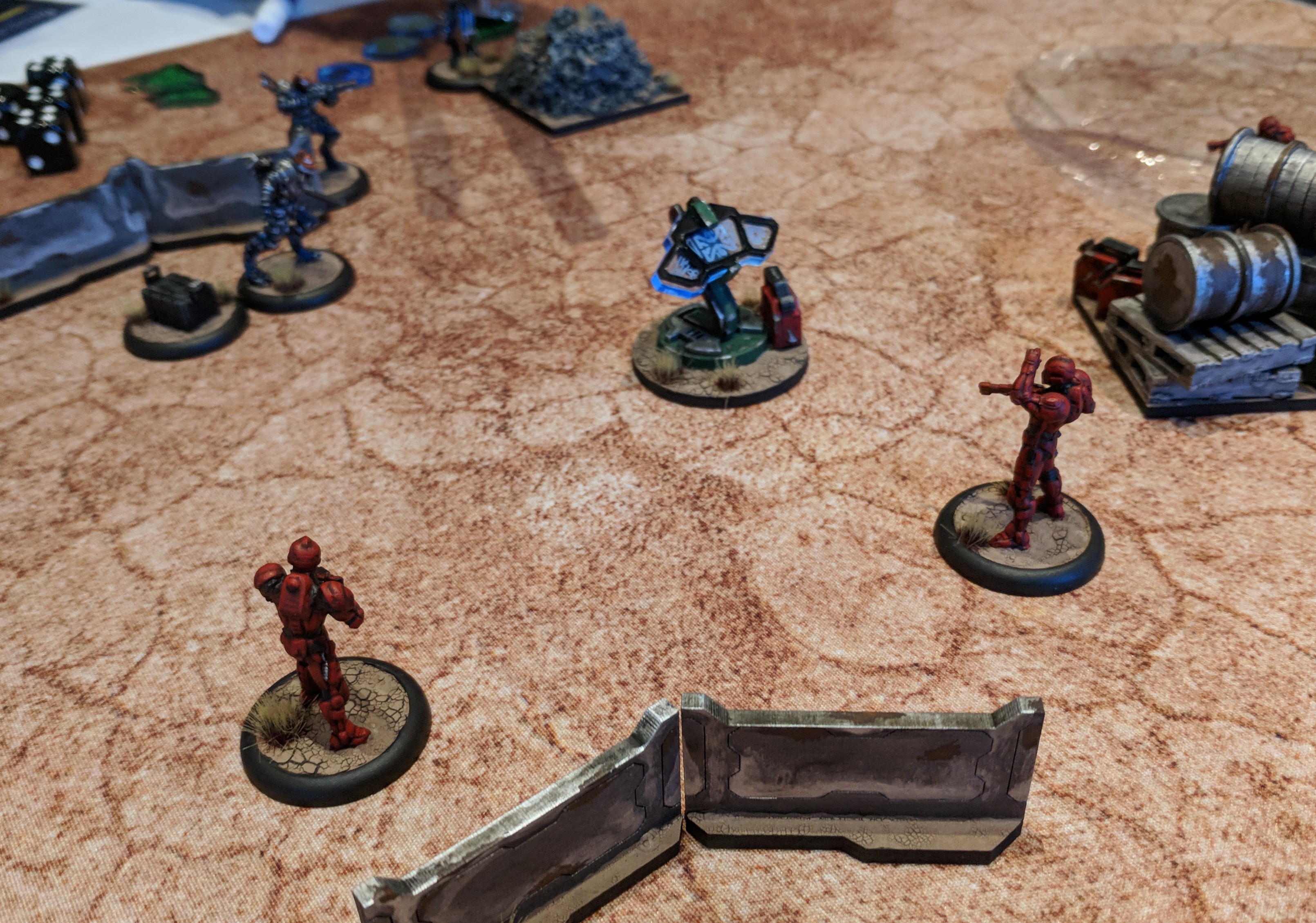 So what makes Breachstorm so cool?

Besides its awesome universe and sweet minis; Breachstorm is designed to be 2d-terrain friendly for easy setup/transport, and its unique terrain template and objective card system to give players total control of the battle they fight.

Players choose a set of asymmetric objectives when they build their list, then take turns placing terrain templates on the board before each game to try and gain an edge before a model even sees the table.

What factions will there be?

We have four factions designed for the first wave of Breachstorm; each has their own unique options, mechanics and feel (all the sculpts we currently have are first-drafts and will change a little bit for their final versions).

The Homeworld Confederacy is a highly advanced human faction that focuses on ranged attacks and tight teamwork.  Confederate teams are able to take advantage of cascading buffs and debuffs to build massive combos and take down the most elite enemies with their powerful railgun technology.

The Zhren’thrar Prides are a felinoid alien race and focus on close combat, including powerful, short range plasma weaponry and melee attacks.  Guided by a strong code of honor, Zhren’thrar warriors are inspired when their comrades achieve glorious deaths in battle, becoming even more powerful if they’re shot down!

The other two first wave factions will be stretch goals on Breachstorm’s Kickstarter campaign; you’ll be able to check out their full rules during the game’s open beta (launching March 1st), but the sculpting/casting will be funded by the campaign.

The Orian Conclave is a reptilian extraterrestrial race that possesses technology and unique psychokinetic powers far beyond those of the “less evolved” races.  Orian teams are small compared to other factions’, but their elite Prelator commandos are able to alter their stats during the game using their advanced Adaptive Combatskins and radically alter the board-state with their telekinetic abilities.

Lastly, the Volucrid Host is a totally alien force of insectoid organisms that brings large teams of vicious combat strains that are strong in numbers.  Volucrid crawlers attack in waves, consuming other host organisms for more power and using the very bodies of their fallen comrades as resources!

Want to give it a try for free!?

The Breachstorm open beta will open up March 1st with the full rules available for free (starting with the Confederacy and Prides; the other two to follow a couple weeks later).  Stay tuned on our website or Facebook page for more info about the beta and the cool prizes you can win for participating! :O

We’re planning to release the game via Kickstarter this summer! 😀

You can see more of the game and stay updated with all the latest developments on www.breachstorm.com (we’ll be adding an expansive wiki with all the game’s background information in the near future as well), the Breachstorm Facebook page, Twitter and Instagram feeds.

Sign up to the newsletter at breachstorm.com to get updates right in your inbox!

You can join the community as we near the launch of the open beta in the Breachstorm Miniature Game Facebook Group, subreddit and discord server!

Lastly; come visit our booth at Adepticon 2018 this coming March, or grab a demo at the Southern Ontario Open in April!

More than Dice: Episode 226 Dioramas and you!

We sit down with Jim and talk about dioramas and how to make a cool diorama and still use use your mini!

The team sit down and discuss the MK4 beta!
: Play in new window | Download

Hosts: Jesse, Keith, StevenThe first and most prolific podcast in the history of MK4 is back with some more hot news! Join us as we dive into the...

On this final episode of the Deep Dive into Privateer Press Series, Paul and Erica interview convention manager John Swinkels. John talks about the...

Hosts: Keith, Jesse, Nigel, Steven We got Keith on the cast to ramble with us about the MK4 announcement! Tune in tomorrow for a more organized chat...